“How can we evaluate Creative Writing”

by Sean Farley
The term “creative writing” is inherently vague. Google defines it as “writing, typically fiction or poetry, which displays imagination or invention (often contrasted with academic or journalistic writing),” but almost all writing displays creativity in some way. Essay writers must imagine a new and interesting thesis, then determine how their evidence can be used to support their claims. Journalists must think of ways to describe the various stories and events they cover in a way that will immediately grab the reader’s attention, drawing them in directly from the headline. However, what separates “creative writers” from these more academic and objective fields, in my opinion, is the absence of rules. Rules, whether they be academic, scientific, or even grammatical, aren’t necessarily enforced in creative writing. A creative writer only has one real responsibility: to produce creative writing. Everything else is optional. And while this affords creative writers an overwhelming degree of freedom when compared to more academic fields, it also comes with a pretty big question: how do you evaluate creative writing?

To tackle this issue, I interviewed Rowan professors Bob Evans and Joan Hanna. Evans and Hanna both teach creative writing classes at Rowan and have published many literary works of their own. Evans comes from a background of short fiction and music, whereas Hanna’s career has primarily been focused on prose and poetry. Combined, they have over 40 years of teaching experience under their belts, and a lot of interesting opinions about the creative process. Many of these opinions seem to interlock with one another, though Evans and Hanna do differ on some topics. However, after interviewing both of them, it seems as though they do agree on one thing: the role of a creative writing professor is not to provide students with a flat A or B grade, but rather to foster a classroom environment in which students are encouraged to share and discover new methods of writing.
Hanna equated this process of discovery to “stepping off a cliff,” in that students will often try things that might not work in an environment where initial failure does not have a major impact on one’s grade. Oftentimes, when writers approach new genres or styles that they are unfamiliar with, the end results will be something that might not be considered a “traditional success.” However, by learning through that process and being given the freedom to attempt it in the first place, students are given a chance to experiment and grow as writers. Immediately slamming them with negative grades for missteps in craft techniques and adherence to an academic rubric can discourage the creative process, and Hanna says that by allowing students to try and fail in a safe environment, she often sees their best vision eventually come to life through revision and self-reflection. 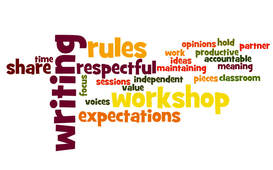 ​Evans has a similar philosophy towards creating a productive class- room environment, though he does believe that traditional grading rubrics can still play a role in evaluating creative pieces. His most important takeaway for creative writing students is to internalize that “language is an artistic expression, rather than a means of communication.” My interpretation of this would be that the use of one’s language and its effect on the audience is more important than whether or not it adheres to traditional guidelines of communication. And while Evans admits that negative grades do have some motivational elements, he believes that more advanced writing students tend to be intrinsically motivated to succeed, and therefore can be evaluated on their participation and attendance, as those are better indicators of success compared to something like the adherence to an assignment rubric. Evans explains that rubrics are at their most useful in entry-level writing courses, where students’ writing skills vary wildly from person to person. Rubrics can provide newer writers a good guideline to use when preparing their assignments and can still provide strong motivation for those that are just starting to learn the basics.
Hanna also echoed this sentiment, believing that creative writers do need to learn the fundamental terminology of their craft before moving on to more advanced topics, and these fundamentals can and should be graded. The misconception that creative writing classes lack any “rules” is also something Hanna has struggled with in the past. For example, in her experience, students that are new to poetry often view free verse as the easiest genre to work with, and therefore naturally gravitate towards it without fully understanding the genre’s intricacies. This misconception that it is somehow the “easiest” type of poetry and has no craft rules of its own is one of many stigmas Hanna is hoping to help students overcome, and grading based on their understanding of writing’s terminology may help to solve that problem.

Ultimately, both Evans and Hanna do seem to agree that grades have some place in the creative writing classroom, just not in areas typically addressed by other, more objective courses of study. Student motivation seems to play a major role in determining the grading philosophies of each professor, and they both believe that evaluating student work based on its adherence to a traditional rubric system becomes somewhat obsolete in more advanced creative writing classes. Instead of viewing themselves as magistrates looking to judge the worth of creative pieces, they instead approach students as mentors, actively encouraging them to approach writing and language as an artistic craft. By tossing grades into the mix of evaluating one’s creative writing, students can sometimes lose sight of their own personal vision for a piece, instead focusing on ensuring their work ticks each little box on the professor’s rubric.
I will admit that I went into these interviews with somewhat of an initial bias. As a writing arts student of Rowan for four years, I have experienced many different styles of grading in my creative classes, and each one seemed to have its own little philosophy towards how its writers should be evaluated. The overall course structure was similar, with creative pieces sprinkled throughout the semester leading up to a major portfolio assignment at the end, but there were many inconsistencies between them. And to be honest, that inconsistency was frustrating. However, after conducting these interviews, I feel as though I finally have some answers as to why it was somewhat necessary. Creative writing does have rules; they’re just a little harder to see.
It’s a field that is primarily driven by the intrinsic motivation to succeed; to create something that you can take a step back and be proud of. Evans and Hanna have proved that by creating an environment in which experimentation is encouraged and creativity is not constantly funneled into rubrics, students are empowered to pursue their vision and grow as writers. Grades can only provide so much in terms of a motivation for growth, and at the end of the day, creative writing is a skill that relies entirely on one’s ability to reflect and improve. Failure will inevitably be part of the process and punishing students for it often has negative effects on their overall willingness to explore new styles and genres. So instead of trying to determine how students should be graded on their work, perhaps the focus should shift to how students can be motivated to bring their best to every class and improve with each lesson learned, regardless of any stumbling along the way.
Other Articles:
Powered by