An Interview with Marissa Cohen
on self publishing and advocacy 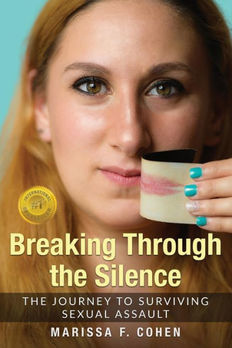 Marissa Cohen is an inspirational leader, author, nonprofit organization founder, and Rowan University alum. Her nonfiction novel, Breaking Through the Silence: The Journey to Surviving Sexual Assault, was published in November, 2017.

Breaking Through the Silence contains a compilation of narratives, interviews, poems, and letters written by survivors of sexual and domestic violence, which Cohen transcribed in her book. The book also contains interviews with professionals working in the field of supporting survivors such as Sexual Assault Nurse Examiners, detectives, Child Protective Services Coordinators, police officers, and more. Cohen, a survivor herself, includes her own nonfictional narratives spread throughout the book as well.

Cohen’s book reminds survivors that they are not alone, and the novel sends strong messages for survivors to seek help sooner than later. Each narrative ended with advice: survivor to survivor. Most of the time, the advice is for survivors to find their voice, to break the silence that many victims struggle with for a while, if not years after an incident. The book encourages survivors to tell their story, without fear of being judged, because there are people who will help them. They should never feel shame.

Writing the book required empathy and patience. “One of the most difficult tasks was transcribing the interviews,” says Cohen. “I had to make sure I was telling their story accurately, while also keeping their identity anonymous,” says Cohen.

Cohen stresses the impact her friends made by being her support system throughout this process: “I would spend days making sure one sentence was perfect. I would call my friends, and talk to them on the phone for hours about this one sentence.”

Cohen self-published Breaking Through the Silence, which was a challenging, yet extremely rewarding process in itself. “It took almost a year and a half. I started early in 2016 and the book was published this past November,” says Cohen.

The decision to self-publish didn’t come easily: “I did all the prep work to find a literary agent, and finally realized that I wanted to have full control over the book. I wanted to take the full accomplishment if it did well, or the full accountability if it flopped. I liked the idea of this project beginning and ending on my terms.”

Another benefits to self-publishing was setting her own deadlines, which Cohen found to be more time efficient. Also considering the nature of her book, self publishing seemed like the better option in order to avoid any edits to the interviews: “I didn’t want anyone to come in and try and change the concept. It’s from a real place. The words you read are verbatim from the survivor’s mouth. I wanted their voices to be heard.”

Cohen knew she had an interest in helping and advocating for people at an early age, and she always knew that she would write a book one day. Cohen is also the founder of a nonprofit charitable organization called Within Your Reach, Inc. The organization is dedicated to advocacy for sexual and domestic assault survivors by creating educational programs, hosting events, planning fundraisers, and raising awareness. “You have to be extremely organized in order to keep everything functioning,” says Cohen. “Creating email lists, planning events and fundraisers, and posting on social media takes up a lot of time, and hopefully when the business really gets off the ground, I’ll be able to hire people to help with these tasks.”

Cohen is currently employed with the United States Army Reserve, where she recently accepted a promotion as a Substance Abuse Prevention Coordinator. Previously, she had been an Employee Assistance Program Coordinator. Cohen graduated from Rowan University in 2014 with her Bachelor’s of Arts in Psychology with a concentration in Cognitive Psychology.
Marissa Cohen is a Rowan alum with a mission rooted in advocacy. In an event titled Publishing Advocacy, Marissa took an audience through her experiences supporting sexual assault and domestic violence survivors. Audiences were exposed to the realities of violence and learned how to be an advocate for victims. Marissa also shared her efforts in self publishing in the field of mental wellness. Students interested in the growing field of self publishing as well as memoir found the talk particularly useful to their careers. Those with similar missions in social justice learned how they could use their skills to make our world a safer, healthier home. The event was held February 28th, 2018 2pm-3:30pm in Student Center Room 144A

Photography and Caption by Mike Fotos
Powered by