"Behind the scenes of rowan's hiring process"

By Sincere Perez
As Rowan expands, so too does its class offerings, and with more classes comes more staff to be hired. For some departments, this task is easier than others. But for Writing Arts, professors must do more than just lecture: they have to be personable, talented, and involved enough to become fully engrossed in the creative work of students. For example, this semester I took Writing Creative Nonfiction, taught by Katherine Budris. This is a class that challenges writers to put themselves into their own creative pieces, rather than just explore the sometimes-aimless space of creative writing. After hearing that there were new candidates looking to follow in Budris’s footsteps and teach the class, I knew I had to get involved somehow.
Throughout the semester, I met up with four candidates who all seemed beyond-qualified for the job. They were all successful writers with published work who taught at their respective universities. We spoke about the climate at Rowan, what I was looking forward to in a classroom, and about writing in general. After speaking to the candidates, I realized that no matter the decision, a bad choice was basically impossible. With such qualified candidates, I became interested in how Rowan actually hires its staff. Although it may seem as easy as just finding the right candidate, the hiring process is much more complex than it initially seemed. I sat down with Ron Block as he explained the process to me.
​The first part of the hiring process is making sure people know the job exists. The position has to be marketed so professors across the country can learn about it and apply. The department advertises the job to many places, such as the Chronicle of Higher Education, newspapers, and higher education magazines. Then, after the job offer becomes well-known, candidates begin to send in their applications. Possible employees send resumes, cover letters, letters of support, statements of their teaching philosophies, and curriculum vitae to Rowan.
After reading through all these documents, the hiring committee must then sit down and choose people to interview by phone. As the potential candidate pool slowly becomes smaller, the remaining applicants are interviewed through phone calls for about thirty minutes. Typically, they only choose three people to do in-person interviews, but this time four were chosen.
These four candidates held readings where they would share their work, and I was lucky enough to be in attendance for all of them. After the candidates were sent home, a final decision was made. In this instance, Heather Lanier was the lucky one to receive the new position at Rowan. Heather is a successful essayist and poet that specializes in nonfiction, and even has an official TED talk that challenges listeners to reconsider their assumptions on the terms “Good” and “Bad.” I know she’ll do great here and my only regret is that I won’t be around to take her class. 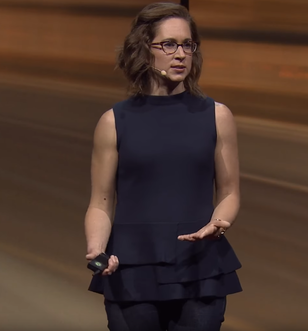