by Rachel Barton
As a Writing Arts major, I’ve been told quite consistently by those unfamiliar with my field just how difficult finding a career will be. To be best prepared, I have tried to pursue as many internships in jobs related to writing and publishing as I could. I was always anticipating that each internship would show me what I didn’t want in my career, but that has rarely been true. Rather, it turns out I want to work everywhere. I’ve interned at publishing houses, literary magazines, online magazines, and multicultural nonprofits and discovered a variety of ways I could pursue my passions for reading and writing.

I first met Megan Atwood while pursuing one of these internships. We met to discuss the trade publishing world and possibly figure out what my best role would be in that realm. Megan came to Rowan after working in trade publishing for almost two decades and having almost 40 books published. Along with our meeting, she lent me a couple books on publishing careers. While I found Megan to be immediately friendly and knowledgeable, I didn’t think that we would interact further. She had never been my professor and, it seemed, never would. 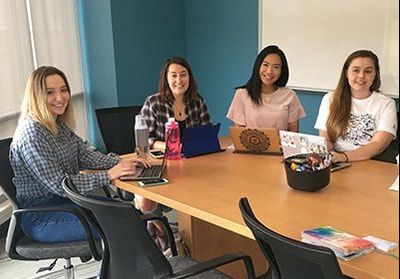 Students Devon James, Sarah Knapp, Britt Eng, and Rachel Barton at a Singularity press meeting.
​Shortly after the end of Spring semester 2018, Megan won a SEED grant to begin the process of building a publishing house through Rowan University. She used the money from that grant to employ a well-rounded team of interns. Megan focused half of the team within Writing Arts and half of the team on PR and marketing. Devon James and Sarah Knapp, both graduates from WA and current students in the masters’ program, joined the team. After taking Megan’s Publishing course, they were armed with knowledge needed to contribute. Megan also selected Brittany Eng and Griffin Gallagher through an interview process. They showed not only an immense capability in their field, but also an interest in learning about publishing.
I joined the team in a less official way. As head intern for the Writing Arts department, I slipped in like a stowaway. Although I wasn’t chosen for the project, I knew I wanted to be a part of it. Megan’s talent and personality, backed by such capable students, were sure to produce something really special. We began with technical aspects: choosing a name, creating a logo, defining our publishing company. From the beginning, we knew the startup would focus on publishing YA genre fiction. Having read a ton of that growing up, I understood the sense of community built in to each world. From there, we chose words and concepts that we felt best suited that focus before ultimately deciding on Singularity Press. The word singularity has a variety of definitions. Along with referring to “uniqueness,” singularity also has definitions in science and mathematics. In cosmology, a singularity is a place and moment when a celestial body becomes in- finite and unknowable. In mathematics, a singularity is a point at which a given mathematical object is not defined—not “well-behaved.” And in social systems theory, a singularity refers to a small change that creates a big effect as it ripples out.
​We also knew where we wanted our press to go, once we had started it. Singularity Press, once realized, would be a nonprofit, using any profits to support marginalized individuals in pursuit of internships in the world of publishing. Although we knew who we were as a press and what we aimed to do, we still had to get there. And to get there, we needed funding. Finding funding became our highest priority. We applied to and are still in the process of applying to grants and funds.
Through Rowan, we applied for and won a position on Prof Funder. Prof Funder features various causes for the month of November and opens up for tax deductible donations. Along with sharing our link all over social media, we also got quite creative in fundraising. I offered a sonnet to anyone who donated a certain amount of money and we’re holding a book drive to raise funds as well.
​Megan guides us through the technical processes of launching a press, but also allows us to lead the creative endeavors. We run the social media accounts and come up with ideas for future book launches. Our social media plans feature quotes from famous authors, significant works in YA, as well as engaging questions shaped around dates and holidays. We focus on building worlds and creating immersive marketing plans. Once Singularity Press is off the ground, we want to incorporate multimodal experiences and different forms of storytelling. I’ve interned in many places and tried out a few different careers. However, I would be remiss if I didn’t admit that working on Singularity Press has been one of my favorite positions. Although it has plopped into my lap at the conclusion of my time at Rowan, the work I’ve done with Megan and the rest of the interns has been disproportionately significant. Not only is the work we do interesting and helpful to my future career, but it has also provided the opportunity to develop a genuine sense of community and teamwork that I will truly miss when I’ve gone.
Other Articles:
Powered by