"Self-Publishing: A Change in perspective"

By Sean Farley
As a Writing Arts major, getting one’s work published is usually considered the ultimate goal of any writing project. And for most people, getting published usually only comes in one form: the traditional publishing route of submitting work to an external publishing house, having them read that work, then offering you either an acceptance or rejection. For writers, rejection is basically second-nature: we often accept that most of our work will require long hours of editing and numerous revisions before it even approaches the point of being acceptable for publication. And even then, it’s not always a guarantee. So when I talked to Jason Luther, a professor of Writing Arts at Rowan, on the topic of self-publishing and how it can circumvent the long, tedious process of traditional publishing methods, I have to admit I was a little skeptical 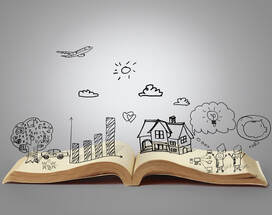 ​Jason is currently set to teach a “Self-Publishing” class here at Rowan in Fall 2019, a course that he has introduced to the department’s curriculum as a means of teaching students how their work can be published without going through traditional means, as well as how to promote and advertise their work so that it actually reaches its target audience. With the rise of digital publishing alongside the increased popularity of genres such as fanfiction and personal blogging, it’s no surprise that self-publishing has skyrocketed in terms of its popularity among young writers. Whereas previously, self-published works such as Zines had to be printed in a physical medium, which could become increasingly expensive for those wanting to distribute their work to a larger audience, digital publishing has essentially removed all barriers for people when it comes to putting their writing out into the public.
​To be honest, this complete and total lack of boundaries was something that initially put me off self-publishing, primarily because I felt the medium was almost “too free” to actually contain any substance. While the traditional publishing methods can definitely be a total hassle, and an expensive hassle at that, I felt like some level of gatekeeping was still required. At least to ensure some basic requirements such as factual accuracy for nonfiction and grammatical accuracy for basically everything else is maintained. However, Jason revealed that traditional publishers aren’t the only “true” method of addressing potential writing issues such as these. With self-published work, the author has a direct line of communication between the writing and its audience. Because of this, the public itself acts like its own content filter, with books sinking or swimming based on their own merits, rather than adhering to the guidelines of a traditional publishing house. 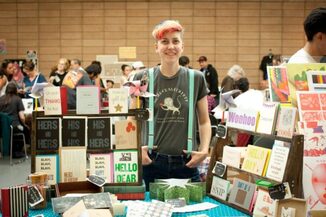 While it’s technically true that self-publishing allows for “anyone to publish anything,” success is still measured by how much of that content actually resonates within its audience, creating a much more collaborative writing space that removes traditional boundaries such as editors and sales expectations. Instead, self-published works are essentially edited by the writing public, with feedback constantly being exchanged between authors as they work to develop their writing and improve upon their skills. Being someone that had definitely believed in the power of traditional publishing houses and the value they could bring to one’s work through the rigorous editing process, this idea of community-based revision and an overarching collaborative writing process between individual authors was not something that I had previously considered.
​Another benefit of writing within the self-publishing community that Jason Luther touched on was the pace at which an author can actually produce their work and immediately get people reading it. Traditional publishing houses often require authors to go through long periods of bureaucracy during which very little writing is actually being done. Instead, many hours are spent filling out papers and signing permissions for the corporate and legal side of things, rather than improving upon the writing itself. With self-publishing, an author can immediately put their work into the public sector as soon as they feel it is ready, allowing them to receive feedback and improve upon their own work much faster than those that choose to slog through the traditional publishing process. 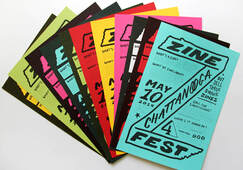 ​This is not to say self-publishing is entirely without its own issues. One of the most common potential problems that Jason Luther spoke about was marketing and promoting one’s work in the self-publishing community. With so many authors producing so much content so quickly, it becomes fairly easy for one’s work to get lost in the massive ocean that is the self-publishing sector. However, because self-publishing is such a collaborative industry, the marketing of one’s work is also something that can be extraordinarily collaborative. Events such as Zine Festivals are held throughout the US, allowing authors to bring their own work and sell it within these writerly communities. In certain cases, such as Kickstarter or other crowdfunding websites, the writing itself could also become its own marketing campaign, amassing backers and gaining public traction while simultaneously funding the author’s own work.
As someone who entered this discussion of self-publishing from a fairly skeptical and dismissive point of view, I must say that Jason Luther has really opened my eyes about the possibilities of self-published work. It’s more than just an “easy way out,” it’s an entire ecosystem of writers all working to create new things and offer feedback to each other in order to elevate their own skills. There’s a culture to self-publishing, a history, and a method that keeps the scene growing and thriving with each passing year. It’s a gateway to possibilities where the only restriction is the author’s ability to create something that sticks with their audience.
Other Articles
Powered by