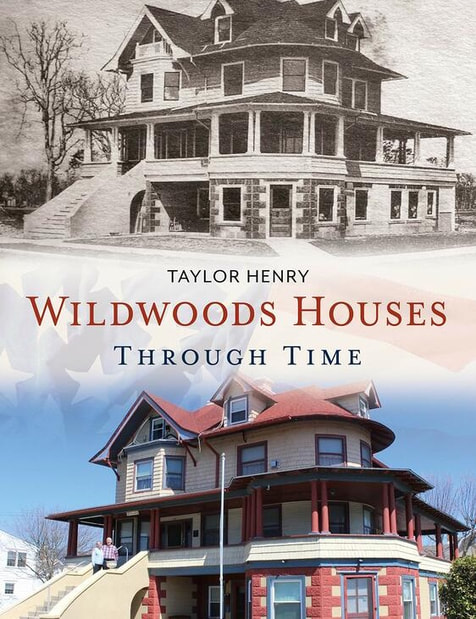 by Rachel Barton
Taylor Henry, a recent graduate of Rowan’s Writing Arts program and current student in the Master of Arts in Writing program, published her book Wildwoods Houses Through Time. The Writing Arts department was thrilled to hear of Henry’s success as she is one of the first students to have a book publishing through their undergrad experience. The book covers the history of local architecture in the Wildwoods before World War II, focusing on the stories of over one hundred houses. Henry wrote Wildwoods Houses to demonstrate why these houses need to be preserved.
“The barrier island that is now known as the Wildwoods was first developed in the late 1800s, when traveling business people discovered how the seashore climate cured their ailments. From then until the 1930s, lots of houses were built that represented the most stylish architecture of the times, from Victorian to Craftsman,” she explains. “Today those houses are in danger of being demolished by re-developers and replaced with condos.”
Henry grew up in Wildwood and has volunteered with the Wildwood Historical Society for years. In 2017, Fronthill Media inquired about a Wildwood installment for their series “America Through Time.” The opportunity from Fronthill Media fortuitously coincided with the conclusion of Henry’s undergraduate studies, allowing her to focus entirely on her research. She began working on the book as her Portfolio Seminar project, under the guidance of Dr. Drew Kopp.
​“I had the idea of advocating for Wildwood’s forgotten early history since I started volunteering at the historical society but didn’t know how to do it until Fonthill emailed us. Then I realized I could do it by writing a book. I pitched my idea in a return email and Fonthill quickly approved it. I already knew some houses I wanted to include, but I also did a lot of posting on social media and dropping letters in people’s mailboxes to find homeowners who wanted to tell me the history of their homes,” Henry recalls.
For her, the publishing process was surprisingly easy. Fronthill Media often works with debut authors and guided Henry through the logistics: agreeing on a contract, setting deadlines, formatting the manuscript, making corrections and getting publicity. Drew Kopp and professor Megan Atwood helped her look over her contract to ensure fairness. She agreed to produce the full manuscript in just five months’ time. The full turnaround from beginning her proposal to getting Wildwoods Houses published took less than a year.
“It was extremely fast in the book publishing world,” Henry said. “But to someone like me, who is used to writing a news article and seeing in the next day’s paper, it felt like an eternity.”
​Although Henry chose the Writing Arts program at Rowan to branch out from journalism, she suggests that hopeful writers start small at their school paper, The Whit, or literary magazine, Avant. From there, you can gain experience and more easily work up to writing a book and working in the field. Throughout the process, Henry warns, writers will typically feel self-doubt. “At times I thought my idea was ridiculous, that people would argue that old houses are not worth the trouble,” she remembers. “I felt silly comparing Wildwood to Cape May, and I wondered if my book would even sell. What motivated me to keep writing was the homeowners who told me how thankful they were that someone was documenting their stories, then telling me they would be buying several copies of the book as Christmas presents for all their relatives.”
​It may be hard to believe that, even after publishing her first book, Henry could feel insecure about her writing. Pursuing writing as a career invites discouragement. It’s important to look around and celebrate each accomplishment, like Henry’s. She continues to cover local news for NJ.com and the Cape May County Herald; Henry plans to keep writing about history and preservation.
Other Articles:
Powered by